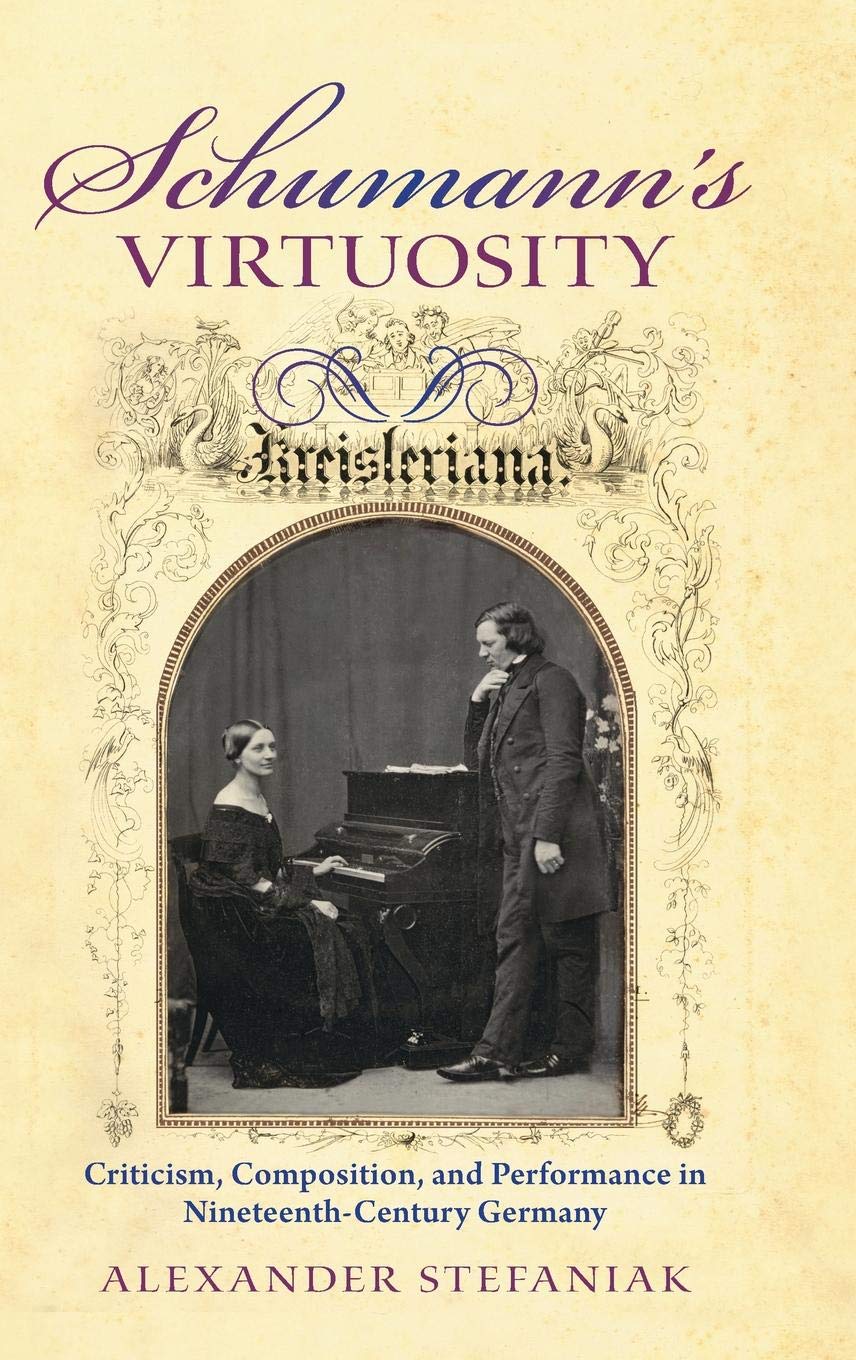 It is no surprise to find that all three titles foreground the same composer, whose person and music embodied and celebrated the virtuosic in unique fashion. Now, in this thoughtful new book, Alexander Stefaniak turns the focus toward Robert Schumann. To those for whom the essence of Schumann is captured in miniatures such as ‘Träumerei’ (Kinderscenen, Op. 15 No. 7), or who would happily join the Davidsbündler marching ‘contre les Philistins’ at the end of the Carnaval, Op. 9, the choice might seem strange: Schumann is so readily identified with enigma, interiority and the ‘poetic’ – in a sense, he seems all that Liszt was not. The well-known photograph of Robert and Clara that graces this book’s cover – she seated, hand resting lightly on the keyboard, he upright, ruminant, hand resting on chin, the whole tightly framed in a domestic setting – might only seem to emphasise the point.

But as Stefaniak casually observes in the opening sentence of Part I (p. 17), Schumann’s early musical ambitions were themselves those of ‘an aspiring piano virtuoso’, one who ‘delighted’ in works such as Hummel’s Piano Concerto No. 2 in A minor, Op. 85. Stefaniak’s aim is to track Schumann’s engagement with what he terms ‘the virtuosity discourse: a lively, at times acrimonious discussion in which musicians and writers debated the imagined distinctions between transcendent and superficial virtuosity’ (p. 2). This he does through close attention to Schumann as pianist, then more influentially as critic and composer. The book’s six chapters, divided into two main parts (‘Schumann and the piano virtuosity of the 1830s’; ‘Schumann’s virtuosity and the culture of the work concept’) and framed by an Introduction and Epilogue, effectively trace his entire career, through close engagement with a series of compositions that routinely get relatively short shrift in such accounts: the Toccata, Op. 7 and the ‘Abegg’ Variations, Op. 1; the Etudes Symphoniques, Op. 13 (and their source work, the unpublished Fantaisies et Finale); the Concert sans Orchestre, Op. 14. Later chapters explore the well-known Piano Concerto, Op. 54 (along with Clara’s Concerto, Op. 7), but also the Introduction and Allegro Appassionato, Op. 92 and the Introduction and Concert Allegro, Op. 134, the Violin Concerto and the Phantasie, Op. 131. Aside from close attention to compositions, Stefaniak also draws widely upon Schumann’s and others’ critical writings, as well as incorporating his engagement with his contemporaries and close musical circle: Clara Wieck, obviously, but also Henriette Voigt and Joseph Joachim.

Above all, Stefaniak seeks to show that Schumann’s engagement with the ‘virtuosity discourse’ was multifaceted and by no means entirely negative. He was ‘constantly exploring questions of transcendence and superficiality in virtuosity. For him, transcendent virtuosity was always an open question – not a straightforward category but an ideal that was subject to negotiation and reinterpretation’ (p. 7). Elsewhere we learn that ‘the boundary between superficial and poetic virtuosity – between sensuousness and interiority – was for Schumann a flexible, porous one’ (p. 24), or that he adopted an ‘equivocal’ approach in the search for what Samson describes as ‘an eighteenth-century balance between virtuosity and work character’ (p. 159).

A key term in Stefaniak’s vocabulary for the ‘postclassical’ keyboard repertory of the 1830s is ‘transparent’, particularly with regard to textures, as for example in the case of the Hummel Concerto in A minor (p. 17). Neither this nor the noun ‘transparency’ appears in the Index, however, and it might have been well to define it more fully at some point. Its opposite crops up in the discussion of the ‘Abegg’ Variations in Chapter 3 (‘Poetic showpieces in the cultivated salon’), in which Stefaniak claims that ‘Schumann used a nontransparent style of virtuosity to create musical metaphors for interiority and cultivation’ (p. 92). He situates the work nicely in the context both of postclassical virtuosity and of the early nineteenth-century culture of salon entertainment, whereby the musical ‘translation’ of the name Abegg presents ‘a musical pun and challeng[es] listeners to discern the connection between title and theme’ (p. 93). The ‘nontransparency’ arises from Schumann’s leading ‘performers and listeners through an elaborate process of thematic concealment’, an ‘aspect of the showpiece’ that ‘scholars have yet to recognize’ (p. 94).

This latter claim – one of several such – strikes me as rather exaggerated, as does also the analysis of the ways in which Variation 1 ‘subverts thematic transparency’; that ‘the first four measures cloud the theme’s dominant and tonic harmonies with embellishing diminishedseventh chords’ hardly does great violence to the thematic template, and Stefaniak himself admits that the variation ‘mirrors the formal and harmonic outline of the “Abegg” theme’ (p. 96). Nonetheless, one cannot discount possible differences between a twenty-first-century ‘analytical’ listening practice and the practices of the nineteenth-century salon; Stefaniak cites Wilhelm Fink and Ludwig Rellstab in support of the perceived strangeness of this composition in its own time.

Another instance of Stefaniak’s noticing what others have apparently not comes in a later analysis, of the Introduction and Allegro Appassionato, Op. 92, composed for Clara in 1849 and one of the works through which the composer/performer collaboration of husband and wife – the marriage of compositional logic and performative virtuosity – could be publicly staged. What ‘scholars and critics have yet to acknowledge’ is Schumann’s modelling of this work (Stefaniak describes it as ‘a sonataform concerto movement preceded by a slow introduction and overridden by an apotheosis coda’) on the first movement of Schubert’s ‘Great’ C major Symphony (p. 207). Be that as it may (and I, for one, am unconvinced, as I am also by Stefaniak’s efforts to relate the Toccata, Op. 7 to Beethoven’s ‘Eroica’ Symphony: pp. 147–50), the more relevant question is the analysis of how the work allies pianistic virtuosity to compositional control in order to prevent the former declining into mere emptiness and superficiality. For Stefaniak, the crucial strategy is the harnessing of the Introduction’s horn-call (‘a Romantic metaphor for distance’ [p. 214] that establishes a connection to the earlier analysis of the ‘Abegg Variations’: see pp. 103–4) so that its subsequent appearances ‘align with and seem to unlock the high points of pianistic virtuosity’ (p. 211).

A crucial juncture occurs in the coda, which Stefaniak interprets both as an apotheosis of the Introduction (Figure 6.1, p. [208]) and as an element ‘derived from the symphonic tradition [that] trumps the tonal logic of the sonata-form concerto movement’ (thereby further securing Schumann’s place in the canonic tradition stemming from Beethoven and Schubert). The diminished-seventh arpeggios that set in at bar 451 following the G major orchestral tutti seem to presage a cadenza, suggesting an imminent close to a formal trajectory that is essentially now complete. From bar 457, however, the piano becomes the accompaniment to the reasserted horn call passing between horn and clarinet, as in the Introduction, before the woodwind together play ‘the full introduction theme, promising to return the horn-call motive to its original thematic context (p. 214; cf. Fig 6. 1, p. [209], ‘Introduction’). That theme, though, is set over the dominant of E flat major, rather than the tonic G; at the point (bar 472) ‘where the horn call would lock into the theme, though, the piano interrupts with a dense G major chord’; triplet figuration ensues before the solo instrument changes tack, spends twelve bars elaborating the horn motive (‘the longest presentation in the piece’) and eventually ‘links the horn call to the motive that completes the phrase’, allowing the work to find ‘its structural and textural culmination in a moment of maximum virtuosic display’ (p. 214; see also Fig. 6.1, p. [213]).

Stefaniak’s prose is not easy to follow here, partly because he has earlier not fully clarified what constitutes the Introduction ‘theme’. More importantly, though, if I am not misunderstanding him, I find unconvincing his attempt to hear in the piano’s activity during bars 485–96 some kind of restitution of a formerly fragmented thematic whole. For one thing, the version of the horn call that ascends registrally is a variant of the original, lacking its distinctive falling fifth between notes 3 and 4; similarly, the ‘motive that completes the phrase’ has also lost some of its identity, notably the syncopation in the second bar. But Stefaniak also omits to mention the powerful cadential activity in bars 481–85, leading now to a root-position tonic harmony (as opposed to the interruptive 6/3 triad of bar 472): this has the effect of making what follows something of an afterthought (the ‘motive that completes the phrase’ oscillates over a tonic seventh triad, tending toward the subdominant) rather than the culminating event that Stefaniak wants it to be. Additionally, there is the fact that the horn call is first heard after the syncopated theme (bar 1 ff.), as a response to it, rather than as what prompts it into existence. Need of the latter, then, need not be presupposed simply by the presence of the former. Finally, the E flat statement of the theme finds its closest match in the final nine bars of the Introduction, where it is heard quite independently of the horn call and answered by five bars of chordal piano musing.

In writing of the passage beginning at bar 485, Stefaniak invites us to hear ‘not transparent brilliance but a wave of virtuosic plenitude that consumes the keyboard’ (p. 214). I have touched on the word ‘transparent’ above; if this passage leads us to wonder how to discern such distinctions, it is not the only place in the text where Stefaniak’s prose takes on a purplish hue. The writing can be ponderous, with constructions such as ‘I would add that …’ appearing more frequently than makes for comfort. Sometimes there is rather heavy-handed ‘signposting’ of rather obvious issues, while at others perhaps unnecessary digressions get in the way of easy continuity (was there so much need to elaborate upon the style hongrois on pp. 228–29, in connection with the Phantasie, Op. 131?). All in all, though, this is something of a virtuoso performance in the service of an important topic. If I was left underwhelmed by some of the claims made for individual compositions, I salute Stefaniak’s firm command of a wealth of source material (some of which, such as the originally unpublished epilogue to the wellknown ‘Ein Opus II’ essay on Chopin’s ‘Là ci darem la mano’ Variations, is introduced here for the first time: pp. 69–72) and his imaginative use of it to evoke a rich musical discourse that links Schumann’s world to ours.