Review of Chopin and his World edited by Jonathan D. Bellman and Halina Goldberg 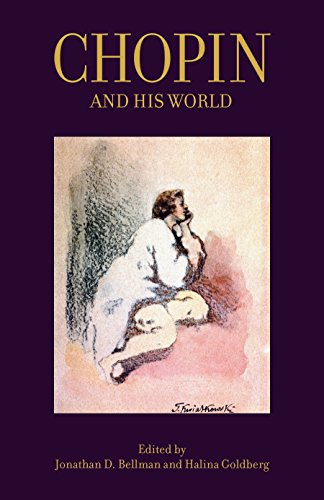 Since its foundation in 1990, the Bard Music Festival has been dedicating its programme each year to a single composer. Concerts are preceded by pre-performance talks, held by renowned scholars, presenting the composer’s works in their cultural and social contexts. As the festival’s website tells us: ‘By providing an illuminating context, the festival encourages listeners and musicians alike to rediscover the powerful, expressive nature of familiar compositions and to become acquainted with less wellknown works.’https://fishercenter.bard.edu/bmf/festival/, accessed 31 January 2019. Each year, then, Princeton University Press gathers material from the various lectures and pre-concert talks into a book, aiming to bring together the latest historical and cultural research and to provide a framework within which the composer’s music may be understood. In 2017, the chosen composer was Chopin, and the present book is the outcome of that year’s festival. After an historical introduction to relevant events in the history of Poland, the volume comprises a series of articles dealing with such topics as the role of dreams in Romantic culture, Chopin and the Jews, the popular roots of Chopin’s musical language, the presence of dance genres and other musical ‘topics’ (in strictu sensu), improvisation, the world of the Parisian piano, and what exile meant for Chopin. Additionally, there are translations of nineteenth-century essays by Józef Sikorski and Karol Kurpiński and a study of drawings attributed to Maurice Sand-Dudevant, likely portraying the hand of Chopin. Together they constitute a fascinating and unsettling collection of essays, which ultimately open up a stimulating avenue of research. The fascinating element is that this book clearly determines how the language used in the nineteenth century to describe Chopin and his music contributes to the construction of meaning within the composer’s output in relation to how the outside world was understood. What may often seem to be Romantic, extravagant language is ultimately a meaningful lens through which we can approach an historical understanding of Chopin. This aspect is evident throughout all the essays, whether on musical topics, Polish national sentiment or the Gothic. Halina Goldberg’s article on the role of dreams in Romantic culture sets the scene. In considering the pervasiveness of oneiric language, she highlights how, in a Humboldtian way, that language becomes the tool that enables Chopin’s music to acquire meaning in the nineteenth century, not as something attached from without, but as something that emerges from within the combination of music and language.

Just as language in general does not refer to a reality outside its boundaries but instead shapes that reality from within and gives it meaning, so oneiric language shapes Chopin’s music from within. This was true of Chopin himself. As Goldberg remarks: ‘In […] his letters, we encounter a Chopin who inhabits the boundary between life and death, between the real and ideal; whose sense of time – past, present, and future – is hazy. The trustworthiness of these accounts is irrelevant; whether they are factual or invented, they tell us plenty – not simply about what Chopin experiences, but about his sense of self: his feelings or alienation, his bifurcated consciousness, his forays into the realm of imagination, or as he called it – the espaces imaginaires’ (p. 39).

A world of intertextuality emerges here within which Chopin is a listener not only to the world outside his music but also to his own music within the very same outside world. As readers and listeners, we are invited to enter this world, where, as Kristeva suggests, within a complex web of different sign systems it becomes possible to transpose one system into another.See Frank D’Angelo, ‘Rhetoric and Intertextuality’, Rhetoric Review, 29/1 (2010), 33. One very intriguing transposition is the one highlighted in David Kasunic’s article, where descriptions of the singing qualities of Chopin’s music are related to perceptions of Chopin’s poor health and to the nineteenth-century emergence of what was described as tubercular singing, that is, the presence of sounds in the lungs of those who, affected by tuberculosis, are approaching death. Lastly, by drawing our attention to the correspondence between George Sand and Dumas père and fils, at the time when Dumas fils was adapting for the stage his La dame aux camélias, Kasunic argues in favour of some remarkable connections between tubercular singing, Chopin, and the drama that later would become Verdi’s La traviata.

Jeffrey Kallberg’s chapter on Chopin and the Jews is probably the most unsettling section for lovers of Chopin’s music, but I use the word ‘unsettling’ with positive connotations. Kallberg revisits the letters in which ‘Chopin’s invocation of the word Jew, […] verge[s] into invective and abuse. In a correspondence that otherwise portrays a sympathetic and imaginative individual […] an overview of his use of “Jew” reveals something else entirely: something repulsive, something bitter, something distressing’ (p. 123). We are attached to the idea that our beloved composers are exceptional figures, and we cannot imagine them affected by questionable habits and beliefs. Kallberg is aware that ‘On reflecting on this verbal practice, we can note first that using “Jew” as an epithet was utterly common in Chopin’s time’; George Sand, Robert and Clara Schumann, and Franz Liszt were not immune to this practice (p. 127). Indeed, he suggests that ‘caution, when judging figures from the past by ethical and moral standards of our time’, is very often a stance taken by biographers (p. 128). However, Kallberg wonders whether something else can be discovered in Chopin’s aesthetic about his attitude towards the Jews. He refers to Ruth HaCohen’s book The Music Libel Against Jews. Historically, Jews were very often associated with noise. Chopin abhorred the idea of noise. In his letters we come across some ‘bemused reactions to the sounds of actual Jews, dating from when he was a teenager, and given that we have reason to suppose that some of his distaste for Jews was in place from a young age, is it possible that some element of his performing aesthetic derived from a desire to distance himself as a performer, as much as possible, from any association
with “noisy” Jews?’ (p. 133). The author discusses some of the evidence and reflects in particular on the Prelude in A minor. He is aware that discussing Chopin’s anti- Judaism ‘leads us down a path of ever more faint hints and insinuation’ (p. 140), to which the Prelude in A minor does not necessarily provide a stable foundation.  Yet, at the same time, it helps to reveal and amplify how meaning in Chopin’s music is only graspable by ‘allusion, oblique reference, and shaded meaning’ (p. 140); that is, unsettling to the core, as Leon Botstein clearly shows also in his final contribution on ‘Chopin and the Consequences of Exile’. For Botstein, exil  ‘offered an undefined space in which to pursue a wholly individual course’ (p. 332).

As the last chapter in the volume, this creates an interesting trajectory. Where the preceding sections insist on reading narratives – political, human, emotional – into Chopin’s music, the last chapter seems to put everything into suspension: ‘His music was not overtly narrative or descriptive, in the manner pioneered by Berlioz and Liszt. Chopin’s commitment to music as an autonomous medium – coherent in the sense of a language, albeit imprecise in the linguistic sense – was consistent’ (p. 323). A few lines later he writes: ‘Chopin’s music was explicitly poetic in character, and resistant to the model of prose. And despite its overt associations with Polish elements, it was never unambiguously polemical and political. Specificity of meaning was not so much inscribed in the text as imposed by individuals who harboured little doubts about the precision and clarity of their understanding’ (p. 324). This, however, does not necessarily contradict what other authors in this collection state. Chopin never really considered the option of returning home, and thus relinquishing the opportunities that the cosmopolitan world of cities such as Paris and Vienna could offer him (p. 322). It is from the condition of his voluntary exile and the moral torments that came with it that he was able ‘to transcend the limits of inherited practices and styles’ (p. 323). As Botstein continues: ‘This aesthetic credo created a counterpoint
with Chopin’s experience as a Polish exile; Chopin’s path to originality was marked by these two competing demands on his image of himself and his ambitions. The comparative opacity of music as a means of communication permitted him to shield contradictions and complexities – and his inner self – from view’ (pp. 323–24).

This leads us to the final aspect of this collection: the possibility of opening up questions. Chopin’s works are discussed mostly in terms of topic theory, linking Chopin to other genres of music. The various authors (Anatole Leikin, Jonathan Bellman, Erin McKee, James Parakilas) who mention topics do not call into question Chopin’s level of sophistication in bringing together and manipulating musical topics. However, they stand on a rather delicate but thought-provoking threshold, resisting the temptation to ask explicitly how Chopin achieves this, but, in my opinion, asking that same question implicitly through their very resistance. With the intention of presenting Chopin in the cultural context of his worlds (Poland and Paris), the authors position themselves on the side of the listener, an historical one for that matter, and topic theory clearly strengthens this perspective; but the compositional question lurks around the corner. Improvisation was indeed a very important factor in Chopin’s musical upbringing, as John Rink reminds us in his article, but it seems that something more can at least be suggested. Recent developments in the study of galante and partimento traditions, to which improvisation was integral, are changing our perspective on compositional aspects of eighteenth- and nineteenth-century music. The partimento tradition was at the core of teaching programmes in Italian opera, for example. Likewise, Grove Music Online mentions that Elsner, in his first steps as a song composer, wrote in the galante style.Anna Nowak-Romanowicz and Jerzy Morawski, 2001, ‘Elsner, Józef Antoni Franciszek’, Grove Music Online, http:// www.oxfordmusiconline.com/ grovemusic/view/10.1093/gmo/9781561592630.001.0001/omo-9781561592630-e-0000008750, accessed 4 February 2019. In a private conversation, Robert Gjierdingen stated that ‘From the evidence of Chopin’s early works, he must have had training equivalent to partimenti, but his exposure could have come through German figured-bass treatises. His early teachers have not left many records of what manuals, if any, they used. If, for instance, he studied Generalbass along the lines of Albrechtsberger, then he received a very Italianate education, even if from a German-language source.’ It is clear that the information we have is exiguous, but I think it is worth exploring possible connections between Chopin and both the galante and partimento traditions. When reading this book, I found myself wondering just how Chopin achieved all that he did: improvisation, a refined approach to topics, the ‘opacity of music as a means of communication’, the references to national narratives, the dream-like qualities.

The book offers some captivating and compelling answers, and it can be highly recommended as a means of rediscovering, in the words of the festival website (cited earlier), ‘the powerful and expressive nature’ of Chopin’s music. Mine is only one possible suggestion of where research might move from here. I suspect that an investigation into the presence of schemas and partimenti in Chopin’s music might open new windows, ultimately creating a bridge between topic analysis and a more ‘structural’ (for a want of a better word) but historically informed analysis. The two discourses do not always go hand in hand, but if a way to connect them could be found, this would add one more piece to the complex mosaic of Chopin and his world.