Review of Claude Montal The Art of Tuning: A Self-Guided Manual for Piano Tuning, Design, Action Regulation, and Repair from mid-19th-Century France translated by Fred Sturm 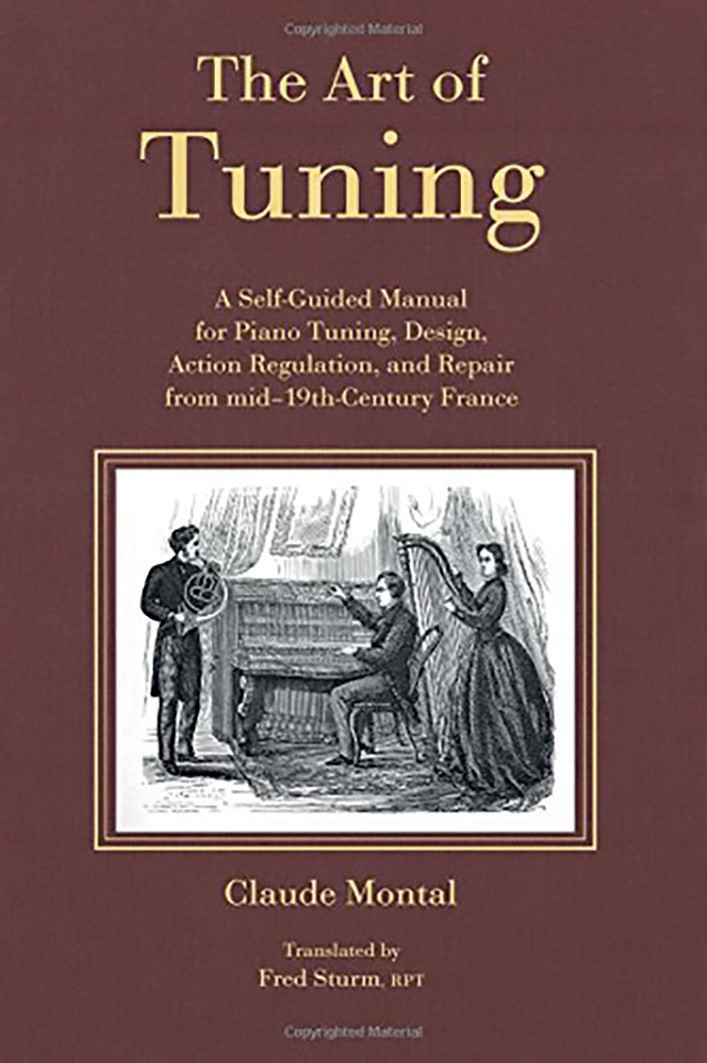 As the translator acknowledges, Montal’s original L’art d’accorder soi-même son piano is about far more than piano tuning. In addition to the very practical advice it offers on that subject, it has a great deal to say about piano history and the design of many aspects of pianos prior to the cast-iron frame era. It also discusses the maintenance of old and new instruments. All this stems from the author’s unrivalled practical experience of the piano profession and industry in the middle of the nineteenth century. The French edition of 1865 is freely available on the internet, but this translation, with all its accompanying scholarly apparatus, is a truly valuable addition to the English language literature of the instrument.

Claude Montal (1800–1865) lived a remarkable life. He was blinded by a childhood illness, and after his initial school education he enrolled at the National Institute for Blind Youth in Paris. After four years as a student, he taught a variety of subjects at the Institute before embarking on a career as a piano technician. Not long afterwards, he began to manufacture pianos, forming a successful and influential company that outlived him.

The book offers some personal insights into Montal’s life and the society in which he lived. His approach to blindness was thoroughly modern. Although by no means the main subject of his book, he clearly wanted to emphasise that the condition need not lead to an unproductive life of unemployment. Quite the reverse: he asserts what many have found since, that blind piano technicians are some of the best in the trade. In one of the later chapters of the book, he quotes extensively from Gaudet’s Sur l’accord des piano par les aveugles (Paris, 1859), in which the author traces the history of blind piano tuners from the 1820s, stressing the centrality of Montal in the process. Montal himself describes the initial prejudice he faced because of his condition, describing the change that had come about during his career and the acceptance of blindness in professional life that existed by the time he wrote his book.

In addition to his practical expertise, Montal was something of a scholar. In his early years, he evidently engaged others to read to him, and his accumulated knowledge is much in evidence in his book. For example, the Introduction contains a review of the literature on temperaments from Pythagoras onwards, including many German and French writers of the eighteenth and nineteenth centuries. Chapter 22, ‘Acoustics’, demonstrates a secure grasp of the subject, which had gained ground as a discipline since the Enlightenment: Montal discusses string vibration, the way sound travels through air, water and other materials, and the theoretical basis of temperaments.

Montal’s 1865 book on which this translation is based has a history in his earlier publications. In 1834 he brought out a short work on piano tuning. This was followed two years later by the more substantial first edition of L’art d’accorder, which achieved considerable success and was translated into German, Czech and Dutch. The 1836 edition stayed in print until the later edition of 1865.

In addition to providing the 1865 text in English, the translation draws on the 1836 edition in footnotes in which comparative information aids our understanding of the development of the piano over the intervening decades. There are also five appendices, which contain valuable information from the earlier edition and make further comparison possible. While Appendix A contains reviews of the early editions of the work and other evaluative material on Montal’s piano-making activities contained in the 1865 edition, Appendix B contains much of the threepage 1836 chapter on piano strings, an area of piano construction that had moved on considerably since the 1830s. Appendix C contains 1836 material on the transposing piano, Pleyel pianos with actions behind the soundboard, as well as sections on down-striking actions and oval pianos. The information on transposing pianos is particularly pertinent, since it is an aspect of piano design of which Montal was particularly proud: the 1865 edition has more than four pages dedicated to the subject, most of the text devoted to his own instruments and their tuning. The translation’s Appendix D contains material on piano actions and repairs not included in the 1865 edition.

Appendix E is by far the most extensive of them all. It extends to something over 40 pages and is entitled (in translation) ‘History of the piano and of the keyboard instruments that preceded it’. Beginning with the piano’s predecessors (tympanon, clavichord, virginal, harpsichord, etc.), it traces the history of the piano to the 1830s. In so doing, it is surprisingly accurate compared with some of the older histories of the instrument, for example paying due regard to the role of Cristofori. It discusses instruments made in the German/ Austrian tradition, a description of which is missing in the 1865 text. But its real strength as far as current students of the piano are concerned is the treatment of the instrument’s history in the early decades of the nineteenth century, under the heading ‘Invention and perfection of the piano’. Here, Montal provides his readers with details of the development of escapement actions, the piano’s compass, transposing instruments and pianos of various shapes, stringing, hammer striking positions, felt hammer coverings, soundboard design, various pedals, and so on. Clearly, Montal had lived through these developments and observed them carefully.

The main body of the work begins with two chapters that briefly cover the rudiments of music and harmony. But having dispensed with these preliminaries, it quickly moves on to an account of the rich diversity of pianos in circulation in France at the time. As already mentioned, there is no discussion of actions in the German/Austrian tradition, and neither is there any description of upright grands, but several different small upright pianos are described, and there is an account of the use of the so-called ‘dust cover’, which Montal claims enriches the sound when it is left in place over the strings during performance. Perhaps surprisingly – since many of the more exotic devices had since passed into oblivion – there is a detailed description of numerous types of pedal, including the bassoon, celeste, expression (Montal’s invention) and others.

Following these introductory chapters, the focus from Chapter 4 is on tuning issues. Here, and for several chapters, Montal offers extremely practical advice obviously drawn from his own experience. After discussing the layout of the tuning pins, the tuning wrench, mute and fork, and how to practise tuning, the author moves on to tuning itself. He advocates equal temperament (his discussion of the mathematical basis for tuning is reserved to a later chapter) and describes in detail how to set a scale. First he advocates tuning major thirds, and then he moves on to setting equally tempered fifths, both upwards and downwards. He discusses some of the practical issues of tuning bass strings accurately, but he stops short of addressing some of the detuning used by modern tuners to provide apparently ‘accurate’ intervals at the extremities of the keyboard.

Montal has much to say about stringing and strings. He describes the main metals used and notes that the predominance of German makers has passed. To these issues he provides a very useful historical perspective (as does the translator’s inclusion of Appendix B), which is also present in his discussion of wound strings. There then follow several chapters dealing with practical matters such as how to create the loops in the strings in order for them to be placed over the pins, how to touch up piano tuning, the influence of temperature and humidity on piano tuning and how to tune several pianos to be performed together. Chapter 15 also provides some very useful and practical observations on tuning pianos for performing with other instruments. His advice on performing with wind instruments is to tune the piano a little sharp, because wind instrument pitch rises slightly when the instrument and surroundings warm up. On the other hand, stringed instruments are told to adapt to the piano’s tuning.

A wealth of other subjects are covered in the book, too numerous to discuss here. The book will have relevance to amateurs as well as professionals involved in the practical business of preparing instruments for performance and keeping them in a safe environment. But the book is of interest beyond the practical. Notwithstanding its somewhat prosaic title, Montals’s The Art of Tuning is a fascinating read which provides not only valuable historical details for the student of the piano and practical advice in their care of instruments, but also opens a window on the social and intellectual times in which its author lived. Of all the nineteenth-century treatises on matters relating to the piano, this must count among the most absorbing of them all.