Review of Nicholas Cook Beyond the Score: Music as Performance 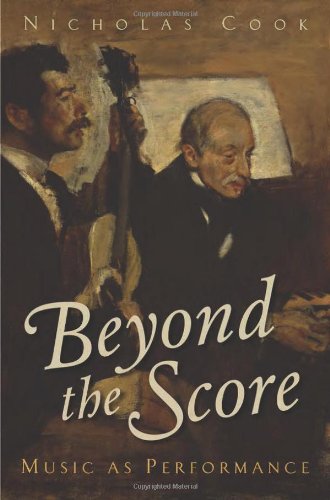 In 2015, Fou Ts’Ong, a prize-winner of the Chopin Competition in Warsaw in 1955, gave an interview that amounted to a profession of his artistic credo. ‘Chopin was one of the most extreme composers’, he asserted:

for instance, the stormy B flat [minor Prelude] No. 16. If you look at the manuscript
[…], it’s obvious, his intention […] I’m his willing slave. What is original? The most original is
the original. Chopin is the most original […] one doesn’t have to impose anything, one just has to understand it, decipher it. Sometimes it’s puzzling. For instance, in the preludes, there is… oh, I don’t know how to… just a minute,
I’ll look at the music. It’s better.

This statement stands at the opposite extreme from a striking anecdote concerning Wanda Landowska which Nicholas Cook invokes in his expansive study Beyond the Score: Music as Performance: ‘she imagined Rameau rising from his grave to demand changes in her performance of his La dauphine: “You gave birth to it”, she imagined herself saying, “it is beautiful. But now leave me alone with it. You have nothing more to say; go away!”.’Nicholas Cook, Beyond the Score: Music as Performance (Oxford: Oxford University Press, 2013), 95.

This powerful declaration of Landowska’s independence might satisfy the expectations of the most ardent advocates of the idea of music as performance. Fou Ts’Ong’s entirely opposite (and, in this context, perhaps surprising) faith in his ‘slavish’ mission would be more at home amongst those theories – burdened by what Cook calls Plato’s curse – declaring that music exists as notation. The two quotes from these brilliant musicians are not juxtaposed here in order to invalidate one by means of the other. It is just that, having to hand the impressive collection of views on music as performance assembled by Cook (dominated – understandably so, given the subject of the book – by convictions of the contributive, or even creative, role of the performer), one cannot resist the temptation to note these contrasting perspectives.

The anecdotal information detailed here does not do justice to Cook’s Beyond the Score, let alone measure up to his essential subject – one of the greatest conundrums in the age-old discussion of music – namely, what music is.

The solution appears to be contained in the provocative title, Beyond the Score: Music as Performance, which suggests that we are witnessing a break with the idea that the musical work is an entity inscribed by a composer in a score. That uncompromising title is moderated by the author’s express intentions:

My aim is not to displace traditional musicology but rather to rethink it from
the inside. I want to address the issues of culture and meaning that concern most
musicologists, but to build performance deeply into their formulation, and make it
possible to bring the specific of individual performances – often in the form of
recordings – to bear upon them. I want to go beyond the score, as my title puts it, but
at the same time I suggest that it is only once you think of music as performance
that you can start to make sense of scores.Ibid., 1.

The task as thus defined is essentially realised, and its execution (prompted by the belief that ‘the study of music has from the beginning been skewed, and its relevance to most people outside academia diminished, by its orientation towards music as writing’) involves gathering and presenting ‘a wide range of concrete proposals for how we might study music as performance and what we might learn from it’.Ibid., 2. Confronted by a veritable cornucopia of views on the subject of performance (which the author cites with consummate erudition: at times juxtaposing them, in such a way that we might draw conclusions from them; at other times synthesising them, in order to reveal his own opinion on a particular matter), we revel in discovering their cohesion or contradiction, motivated – in both of these respects – to discussion.

The wealth of issues dealt with in this book makes it impossible to discuss them here in a comprehensive and objective manner. Forced to choose between providing superficial summaries of particular chapters and extracting two or three absorbing details (motivated by personal interest alone), I will opt for the latter.

My attention is riveted, for example, by Cook’s readings and de-stereotyping of studies by Schenker and Hanslick; by the comparative analyses of countless performances; and by the deft, insightful conclusions drawn from a wide range of theories convincingly grouped together. The strongly accentuated division between analyses of live and recorded musical creations is especially striking (in everyday practice, these are sometimes casually treated as comparable, if not equivalent). Another inspiring feature is the distinction between theoretical and performance analysis. That differentiation – pointed out by John Rink and subsequently described by Cook – is of crucial significance to our understanding of the problematic variance between the observations of theorists on the one hand and the individual interpretations of practising musicians on the other. Cook, drawing into consideration the theory of Mark Johnson and Steve Larson, elaborates on the opposition between the two kinds of analysis by referring to the dimensions of time (the performer, unlike the theorist, has to analyse a work in real time) and space. Spatial relations can be reduced, in a nutshell, to the distinction between the perspective of the observer (the theorist), who has the privilege of beholding a composition from a distance, from a bird’s eye view, and that of the participant (not only the listener, but also the performer), who finds him- or herself proceeding from one note to the next in the midst of a work.

Yet will Beyond the Score bring about a revolution in musicology? Defiant readers might harbour some doubts. They could, for instance, assert that

in the European tradition, the notion of ‘music’ changes with every epoch, and in
such a fundamental way that in each phase of its historical development it belongs to
a different field: it can be associated with the musical material (notes and sonorities),
with the processes of the creation of music (poiesis) or with its sensory perception
(aisthesis). From other points of view, music is seen as a singular form of communication
or as a specific anthropological attribute, while some theories reject its human
provenance altogether and treat it as a force or a quality of nature itself.Michał Bristiger, ‘Wstęp’ [Introduction], in Carl Dahlhaus and Hans Heinrich Eggebrecht, Co to jest muzyka? [What is music?], tr. Dorota Lachowska (Warsaw: Państwowy Instytut Wydawniczy, 1992), 7.

Equally, being wedded to the ideas of certain great musical thinkers and writers, they might insist on seeking the essence of what music is not just beyond the score, but equally beyond the performance (and especially beyond the performer). Yet even the most sceptical readers could not deny that their reflections, and especially their recourse to other texts devoted to musical performances or, on the contrary, to the most esoteric philosophies of music, were motivated and inflected by Nicholas Cook’s expertly crafted study. So it is worth experiencing this book in a full and personal way.