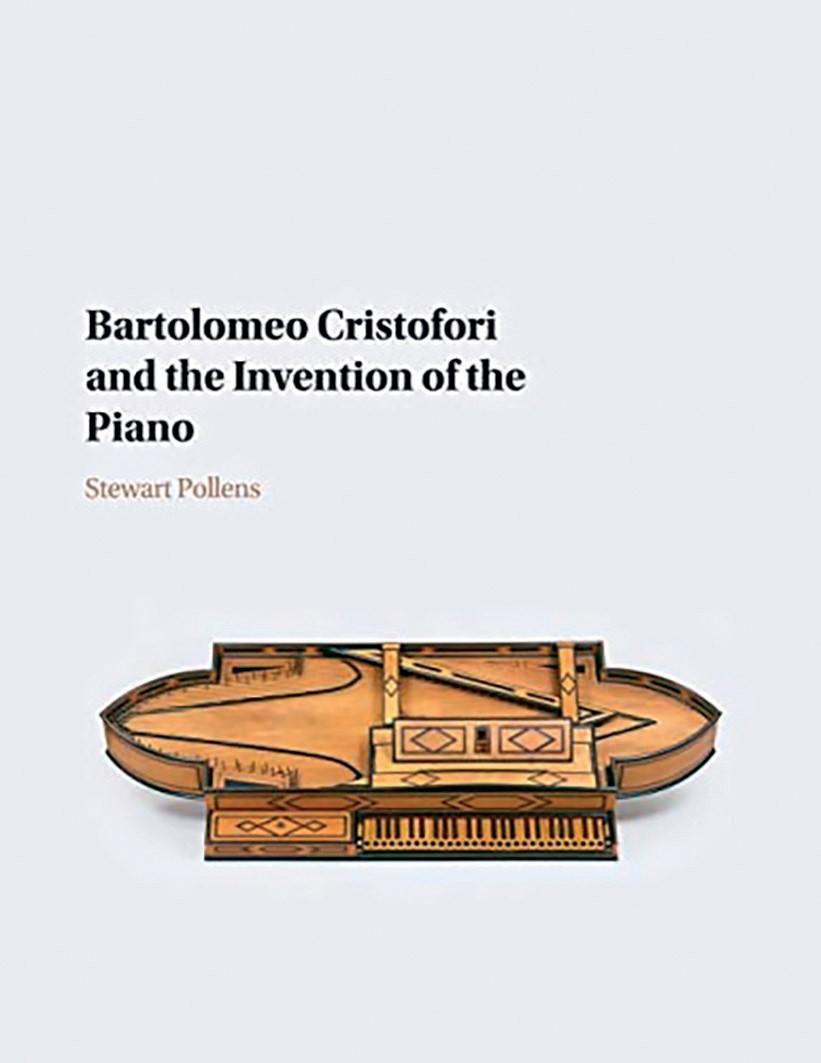 Bartolomeo Cristofori (1655–1731), fabled creator of the ‘cembalo che fa il piano e il forte’, occupies an honoured place in the annals of organology, even though the early history of his invention still remains cloaked in mystery. Stewart Pollens’s new monograph under review provides an upto- date, meticulously researched account of Cristofori’s life and work. From a wealth of familiar and unfamiliar primary documents, Pollens has pieced together a rich narrative likely to become the standard work on the subject. The author of an earlier volume on Antonio Stradivari (Cambridge University Press, 2010), Pollens has ‘always believed that Bartolomeo Cristofori should share the podium with him and that a standalone biography was well deserved and long overdue, as there had never been a comprehensive study that integrated biographical information, his work as a harpsichord maker, his invention of the pianoforte, and his official duties as Medici court restorer, tuner and custodian of its collection of music instruments, with the above placed in the context of musical life in Florence during his years of service there’ (p. 3). To a large extent, Pollens has succeeded admirably in filling this gap, in a volume lavishly illustrated with nearly 150 photographs and schematic drawings of surviving instruments of Cristofori, his assistants and other early builders, preserved today in museums and private collections; also included as a frontispiece is a photograph of a lost oil portrait of Cristofori, bearing in his hand a drawing of one of his hammer actions. The book is handsomely produced by Cambridge University Press, and, it should be added, misprints or errors are hard to detect (there is one minor slip in the bibliography on p. 377, where Zelter is misidentified as Christian Friedrich instead of Carl Friedrich).

Born in Padua, where Cristofori was nicknamed ‘il Burtulo’, he may have been an autodidact who began his career as an organ builder. Be that as it may, no hard evidence betrays his interest in developing the new hammer-activated keyboard instrument before he moved to Florence, where he arrived in 1688, summoned by the young Grand Prince Ferdinando, who hired the 32-year-old Cristofori as a keyboard tuner and instrument maker. Cristofori served the Medici for 44 years, including Ferdinando’s father, Cosimo III, who reigned for a decade after Ferdinando’s death in 1713, and Gian Castone, who ruled the court from 1723 until 1737. Of these three, Ferdinando was a highly skilled musician trained in counterpoint, with a definite penchant for the mechanical; a dedicated horologist, he amassed a collection of 40 clocks, in addition to an extensive gallery of musical instruments. Very likely, Ferdinando’s patronage afforded Cristofori the relative freedom to develop and experiment with the complex, radically new action of the early piano. Our best guess is that this occurred around 1700, though exactly why Cristofori hit upon the idea of a new keyboard instrument capable of achieving shades of contrasting dynamics remains unclear. While an inventory of the prince’s instruments from 1691 lists among the keyboard instruments two cembali (harpsichords), a later inventory from 1700 includes no fewer than 17 cembali, 15 spinette, two sordini (clavichords), two chamber organs and one pianoforte, described as ‘an arpicimbalo by Bartolomeo Cristofori, of new invention, that makes soft and loud […] with forty-nine keys.’ Just how productive Cristofori was during his Florentine tenure remains open to debate. Hubert Henkel’s estimate that Cristofori made some 400 instruments (p. 159, n. 60), among them perhaps 25 to 30 pianos, is likely considerably inflated. In contrast, Pollens argues for a much smaller number, perhaps no more than two dozen instruments. Of the pianos, only three survive today, in various states of repair, at the Metropolitan Museum in New York (with an original compass of FF, GG, AA–c3), Museo Nazionale degli Strumenti Musicali, Rome, and Grassi Museum für Musikinstrumente der Universität Leipzig (both C–c3).

In 1711 the polymath Scipione Maffei (1665–1755) published an extensive account of Cristofori’s invention, the first to expound on its significance, at a time when many remained hesitant to recognise, let alone embrace, the innovation:

It is known to whoever loves music, that one of the principal sources from which the skillful in this art draw the secret of singularly delighting those who listen, is the piano and the forte, whether in statement and repetitions, or when with artful degrees diminishing the voice little by little, one then suddenly returns to full power, an artifice used frequently and to marvelous effect in the grand concerts in Rome to the incredible delight of those who enjoy the perfection of the art. Now, of this diversity and alteration of voice, in which are excellent, among others, bowed instruments, the harpsichord is entirely deprived, and the idea of constructing it so that it might have this gift would be deemed by whosoever it might to be a vain endeavor. Nevertheless, such a bold invention has been no less happily conceived than executed in Florence, by Signor Bartolommeo Cristofali [sic], Padovano, cembalista in the employ of the Most Serene Prince of Tuscany.

Maffei continued with a description of ‘the particular structure of this instrument’, including an annotated drawing of its hammer action, but beyond that, for Pollens, Maffei’s testimonial ‘reveals that musical instrument makers of his time were not simply skilled woodworkers, but were sophisticated individuals with an understanding of performance practice, temperament theory, materials science, and engineering, and who could bring this knowledge to bear in designing their instruments’ (p. 4).

The question of course arises as to how the early pianos were used in Florence, the site of a rich musical culture, still centred on opera during Cristofori’s tenure. Among the leading composers who produced works for the stage was Alessandro Scarlatti, though in time he fell out of favour with the Grand Prince Ferdinando, who cavilled that Scarlatti should produce operas ‘more cheerful, less melancholy, and more melodic’ (p. 227). Also worthy of note is Handel, whose Rodrigo was staged in Florence in 1709. Almost surely Cristofori’s early pianos were not employed in orchestras; there the ‘keyboard instrument of choice’ would have been Cristofori’s spinettone da orchestra, a double-register harpsichord. For Maffei, the piano was especially suitable for chamber music; in 1773 Charles Burney reported having heard the famous castrato Farinelli play a piano made in 1730 by Giovanni Ferrini, Cristofori’s principal assistant in Florence. Exactly when composers began to experiment with the new instrument in a solo capacity is unknown, but it is significant that in 1732, the year after Cristofori’s death, Lodovico Giustini released in Florence his Op. 1, the Sonate da Cimbalo di piano, e forte detto volgarmente di martelletti. Here, apparently for the first time, notated specifications of dynamics entered the domain of keyboard music, even if cautiously, for Giustini limited himself to just a few judicious markings of piano and forte, and occasionally indicated the more nuanced shade, più piano. For the most part, these modest changes in dynamics were triggered by the use of echo effects or shifts in registers, probably, one might suppose, in imitation of Florentine practice in orchestral music.

Pollens’s extensive final chapter examines Cristofori’s influence, and how his invention spread from Italy to the Iberian Peninsula, France and Germany. Curiously, early English pianos are not considered in this chapter, though the Conclusion (pp. 344ff.) does address the introduction of the instrument to England during the 1760s, spearheaded by émigré German builders fleeing the chaos of the Seven Years’ War, and relates how it became established as a familiar feature of London musical life by the subscription concerts of J. C. Bach and C. F. Abel inaugurated in the later 1760s. If the piano was a relatively late import to the British Isles, as early as the 1720s Cristofori’s instruments were likely being acquired by the Portuguese monarch João V, whose royal treasury was sumptuously replenished by gold extracted from the colony of Brazil. From Portugal, it was a matter of time before the Florentine piano arrived in Spain, perhaps through the interest of Domenico Scarlatti, harpsichord instructor to Princess Maria Bárbara, who married the crown prince of Spain, the future Ferdinand VI. Scarlatti followed his pupil to the Spanish court and continued to produce hundreds of keyboard sonatas, some of which, Ralph Kirkpatrick argued, are suitable for the early piano (p. 250, n. 18). More generously, Joel Sheveloff has suggested that as many as ‘two-hundred Scarlatti sonatas will come to be associated with the pianoforte’ (p. 250, n. 20).

In France, the early piano was viewed with considerable suspicion – as late as 1774 Voltaire notoriously dismissed it, compared to the harpsichord, as ‘a cauldron maker’s instrument’ (‘un instrument de chaudronnier’; p. 333). Still, as early as 1713 François Couperin was lamenting in the preface to the first volume of his Pièces de clavecin that the harpsichord was not ‘capable of expression’ (‘susceptible d’expression’; p. 328). But while the harpsichord continued its ‘glorious reign in France’ until the fourth quarter of the eighteenth century (p. 331), German keyboard builders were not averse to arguing for their own agency in inventing and promoting the piano. One was Christoph Gottlieb Schröter, who claimed to have designed a ‘new keyboard instrument with hammers’ for the Elector of Saxony as early as 1717 (p. 284). By 1732 the celebrated organ builder Gottfried Silbermann was turning his attention to pianos, though his earliest surviving models date from the later 1740s, when, as is well known, Frederick the Great commissioned and acquired several – indeed, according to J. N. Forkel, perhaps as many as 15 (p. 293). These were the instruments that J. S. Bach tested at Sans Souci in Potsdam, including improvising on the ‘Royal Theme’, destined for its consummate elaboration in the Musikalisches Opfer, as recounted in the celebrated passage in Forkel’s Bach biography of 1802. According to the organist/composer J. F. Agricola (p. 290), Bach had previously examined an earlier Silbermann fortepiano, but found it difficult to play and weak in its high register. Agricola claimed that Bach later gave his ‘complete approval’ (‘vollige Gutheißung’) to Silbermann’s adjustments to the design, but just how far Bach’s exploration of the new instrument proceeded we shall probably never know. That said, his son C. P. E. Bach did confront directly the timbres of the new piano in one of his last works, the Double Concerto in E flat major for harpsichord and fortepiano (H. 479 of 1788), in which the past and present briefly collided and interacted.